entertaining by the bay

Boneless beef short ribs are larger, more tender and meatier than their pork counterparts - making it a perfect barbecue food. I decided to make these short ribs using some of my favorite Asian flavors - ginger, garlic, cinnamon and star anise to braise the meat and infuse with these flavors, then make a barbecue sauce to brush on the ribs, as they caramelize on the grill. The result is meat that is slightly crisp on the outside, tender on the inside and packed with flavor. It's really simple to make and the results are terrific.

From by the bay wishing you asian style food memories!
Maryann 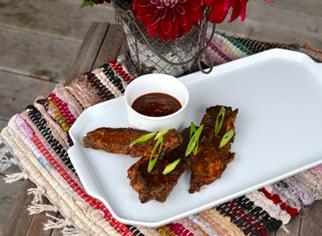 Directions
Place short ribs in a large cooking pot with star anise, cinnamon, garlic and ginger. Add water to just cover the ribs. Bring to a boil, lower the heat to simmer and cover with a lid for 45 minutes. Remove the ribs and place on a platter, covering with some foil. Reserve 1 cup of the cooking water for the barbecue sauce. To make the sauce, add to a medium sauce pan the hoisin sauce, ketchup, cooking water, soy sauce, rice wine vinegar and toasted sesame seed oil. Bring to a boil and then simmer for about 30 minutes. Preheat the grill . Brush the short ribs with the barbecue sauce and grill for 8 to 10 minutes on each side. Serve immediately.