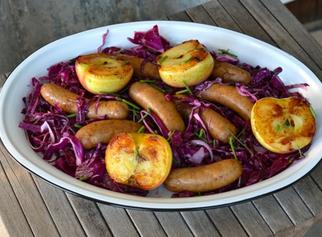 entertaining by the bay

Directions
In medium sauce pan add bratwurst and cider, bring to a simmer and cover for 15 minutes remove from heat. Remove bratwurst remove brats from pan and set aside. Heat oil in a large cast-iron or other heavy skillet over medium-high heat. Add apples, cut side down, and cook, turning occasionally, until golden brown, 5–8 minutes. Prick brats with a fork, add to skillet with apples, and cook, turning occasionally, until browned, 5 to 8 minutes. Add wine and vinegar to skillet. Bring to a boil, reduce heat, and simmer until thickened (liquid should coat a spoon), about 4 minutes.
To serve place red slaw on a platter , add apples and brats and enjoy!